There are lots. Lots and lots of mosquitoes.

It pains me to see that my last blog post was on May 18. That was more than a month ago. I went to Ontario and have come back since then. And I did lots of cool things in Ontario.

I’m heading out in about an hour on a 13 day road trip through the South Slave and Deh Cho regions of the Northwest Territories. It has been sometime since I have been on a road trip, the last time I believe was to jasper in the summer of 2011. I have missed those days. I use to do a trip every year. Like the time I had my truck and camper in 2009: 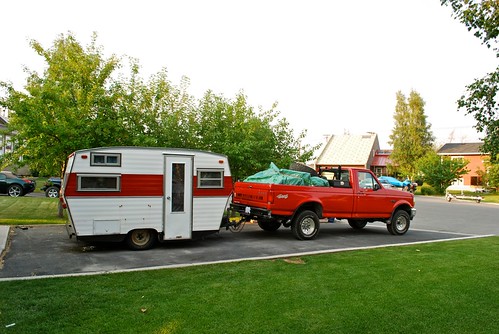 This time we are seriously tenting it. Oddly even in the Northern Frontier of the NWT some Territorial campgrounds only have powered sites. It is annoying to think that the road trippin, tentin, cram all the kids, stuff and the dog in the car days are over. Then again I suppose those who don’t need power, don’t need a campground either.

Possibly during my time meandering through the wilderness of the NWT I will be writing a series call Explore NWT on YkOnline.ca.

Buffalo on the run!!! 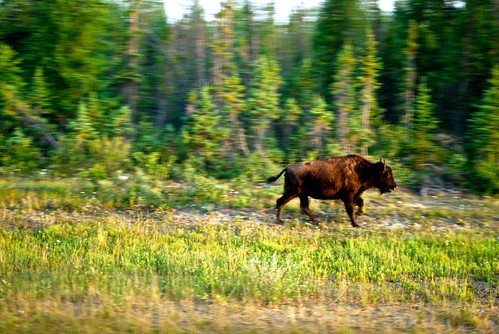 NWT Border… which I wont actually be going to. 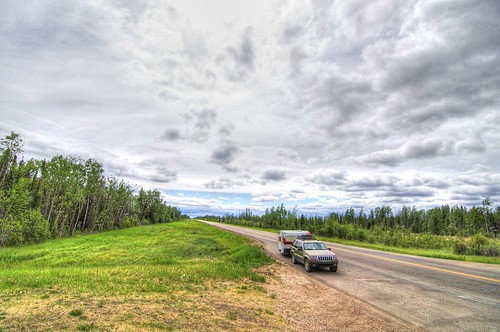 And of course my all time favourite camping photo to date. However on this trip it wont actually be getting dark. Just light, 24/7 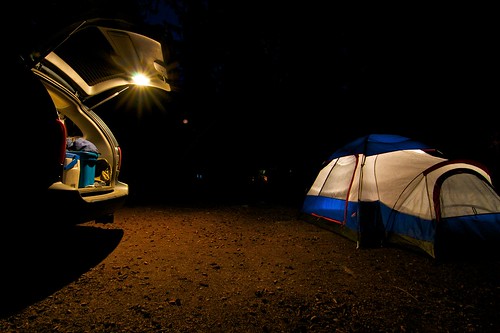 I have lived in the north practically all my life but I’ve never actually been to Inuvik, NT. I’ve actually been to more of western Nunavut than western NWT. I’ve been to Cambridge Bay, NU, Kugluktuk, NU, Bathurst Inlet, NU and so on.

I’m excited to see what is going on in Inuvik. The terrain has always intrigued me and been somewhat of a mystery to me. It is further north than Yellowknife but is still below the treeline and lies along the arctic coast. 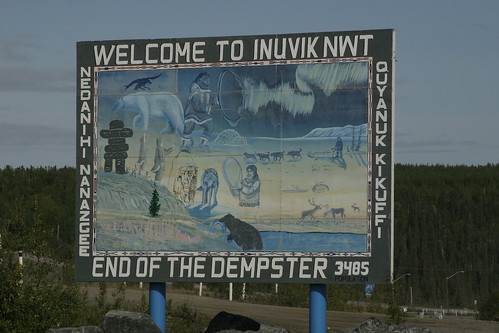 The point of my trip to Inuvik is business but I will have the flexibility to explore the area and find out what is going on up there. My goal is to try and experience Inuvik as if I am a tourist and record everything I am seeing and doing.

While I’m in Inuvik the Great Northern Artists Festival will be taking place, which will be one of the events I’m going to check out. The festival features artists from all over the north showcasing there art and taking part in workshops.

Tomorrow I may even get the chance to go to Tuktoyuktuk, NT, which is an even smaller community.

No doubt over the last 6 month my Social Media usage has gone down and I have lost interest. I have an awesome job but it does not directly involve Social Media full-time at the moment, this will eventually change.

So for me attending Social Media Camp has relit my Social Media Fire again! It is something I believe in, something I see the benefit of but it is also something I think is fun. Creating content, blog posts, photos, podcasts and the community I am involved with.

More so I just finished an interview with a guy(sorry I forgot your name) from WebmasterRadio.fm about Social Media in the North and by north I mean the Northwest Territories.

For a long time I have considered myself a Social Media Evangelist for the north, but like I said I lost that mentality. Just doing that interview though, that was directly related to Social Media in the north, brought back all that passion I have for it.

I remember back in early 2008 and how there were only 5-6 of us on Twitter and Facebook had only been around for a year. We have a come along way and again I want it to grow.

There are barriers, like technology. A lot of the NWT communities doesn’t have high-speed internet of support for smartphone, but you know what! Back in 2008 I rarely used Twitter and Facebook on a smartphone and when I did it was via Text Message, which all the north has.

So my new goal, which is what has me fired up and getting the NWT connected via Social Media. I don’t know how yet but I believe a good start is creating NWT content.

Coal Photography first came to my attention just after he was up in Kugluktuk taking photos with Dave Brosha. Since then I have been glued to the photos the man behind the name, Alexander Legaree, has produced. I was thrilled to have the opportunity to get him on the line and talk about his photography.

Alexander calls the NWT home and has for many years, but not only that, he calls it his inspiration for photography. Ever since the age of 4, Alexander his been into photography, but it really became a passion when he was living in Sweden in 2003. He says “I haven’t looked back since” and his photos show that. Alexander also shares with me he favourite genre of photography, who inspires him and what he is up to next, all in the show.