You would be surprised at how many businesses, organizations and artists don’t have websites out there. There are valid arguments as to why an entity doesn’t have a website and that they don’t need one to survive, but Michelle and I disagree.

In this episode of the KyleWith Podcast, we talk about what the point of a website is in 2015, how you can actually build one yourself easily, some tips for doing it and how to host it. Welcome back to the KyleWith Podcast. It has been a long time since we had a new episode of the show, almost 3 years in fact.

Now recorded out of my awesome mobile recording camper, the show will feature different creative and entrepreneurial people from around Yellowknife, the North and the world. However, on a reoccurring basis we will have a regular guest on the show. Michelle MacDonald is a friend of mine and also a big advocate for Social Media communications. Her musings can be found at ykuptowngirl.com. When Michelle is on the show we will be talking about different topics regarding social media, digital communications and website and how they affect small businesses and organizations.

This first introduction episode with Michelle is a little rough. It was our first time recording and we went in without a plan. Don’t judge our skills on this episode. Listen, laugh and then hang on for the next episode where we really get into a groove.

For many years, I have wanted to renovate a camper into a mobile office or studio. I work from home or from a coffee shop so the concept of having a mobile office was fascinating to me. Hooking it up to the Jeep and just stopping anywhere to work. This beast might not yet make it down the highway, but you can bet I’ll tow it around town on occasion.

Lets start from the beginning. A friend calls, says he has a camper he wants to get rid of. I just at the opportunity to get it. I had a truck camper once and a similar camper to this one, both which I sold and then a couple years later regretted. Life goes on. I got an another one.

This one wasn’t pretty. I didn’t even take an initial ‘before’ photo, I just started ripping crap out of it. There was a ton of stuff. A couple dump runs worth, but I got it all cleaned out and stripped down to the bare minimum.

As you can see the outside is also not pretty and I have yet to do anything with it. It will remain crappy looking until such a time when I get ambitious again. Maybe next year.

Anyways, the interior, in all its glory, was gross and needed a fresh face. I was never going to strip it right down to the frame, that would be just too much work for me. One of my original plans was to have two walls covered in pallets and the other two white. This also changed as I realized how much work this would be. Harvesting pallets is no easy task. I also had to do something about the split level floor. Annoying.

Four coats of paint later. I’m not joking, four coats on all four walls and the ceiling. Everything was white. I really wanted a simple and minimalistic feel to the space and figured that white was a good starting point if I ever wanted to do something else with the space.

Sidenote: The table in the pictures directly below is a solid wood dining room table I sanded and refinished. I put IKEA table legs on it, but for how I want to use it, it is too big for the space.

On to the floor. I wanted to fill in the lower level. Like I said, it was annoying now that the space is so open. I filled the space with stripped 2x4s and then sheeted the entire space with new plywood. Again, I had plans to do something nicer but things take more time then you always estimate.

To finish it all I did was put down two coats of polyurethane to seal and give the wood a bit of gloss.

Once the flooring was done drying I got excited and decided to move in the actual desk I would be using in the new studio. It is another simple desk project: three core boxes put together, stained and sealed, with red IKEA table legs (yes I have a stockpile of IKEA legs).

What I am really excited about is what I’ll be using the studio for. I’m not ready to start talking about it, but it will be a video project. What I’m really hoping I can accomplish with my lighting rig is the ability to light the subject while also keeping what going on outside at a viewable exposure, so you can see the location the studio is in. I’ve going to neat location ideas. However, I think I may need a better video light.

What did I spend

What still needs to be done

I still have a list of things that need to be done in order to get this to a state in which I’m completely happy with it.

I’m hoping to continue updating this article as I cross off those items.

So, what do you think?

I’m glad this article came up because I’ve had the conversation about electronics in Scouts a couple times since the Yellowknife Scouts snowmobile camp this past March. And I say electronics, not technology because technology can be any number of devices. Technically rope is a technology.

You might be surprised to know that I actually don’t like the idea of many electronics on Scouting trips. I don’t support the use electronics to fill time that could otherwise be used for activities that can be skill building and more practical.

However, this is not to say I don’t support the advancement of technology within Scouting. There are many digital technologies that can be deemed useful and align with the Scouting mission. Astronomy charts, GPS, Messaging systems, First Air, etc.

And at a certain point Scouts should be introduced to coding and development. As society moves forward into a digitally connected age, Scouts should understand how it works.

I’ve always considered a scout to be a jack-of-all-trades and a resource. They don’t just consume, they understand how things work so they can help when needed. They can sew, cook, work with wood, weld, perform basic automotive care, survive, adapt, work together and, eventually, code. They embrace learning new things for the betterment of society.

So yes, mindless digital games and endless pointless communication don’t have a place in Scouts, in my eyes, but new technology and how it contributes to society and those around us does. And as the author of the article points out, it is how Scouts approaches these new technologies and educates scouts about them that will make the difference. 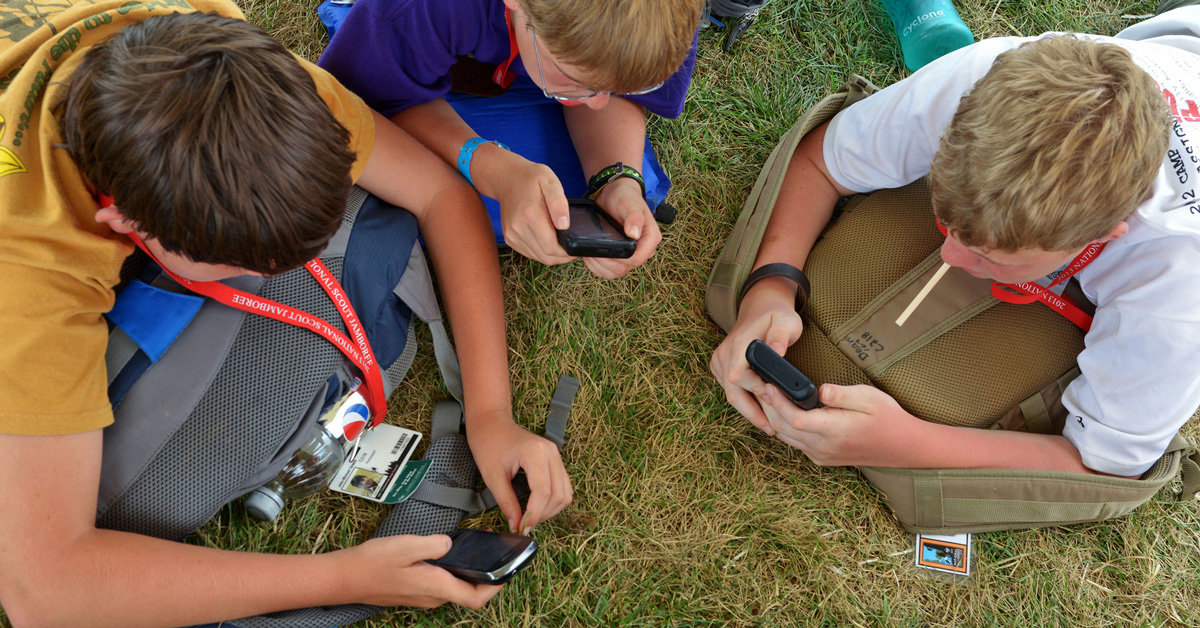 When the weather is nice and you still have the means to get out to a remote cabin out of cell service where there are good drinks, good food, good fishing and good fishing stuff like best marine battery and good people, you just have to go.

Took a friend, Joe of Chasing Pisces, out to Hidden Lake to for a day of ice fishing. He was on a mission to catch a lake trout. Well, he caught one. Then caught another. And another. We found a sweet spot.

Preparing the ciscos started off the day, along with a big breakfast. With two lines set and the third hole drilled we were setting a line when the fish started to bite like crazy. one, two, three, four fish later we finally were able to leave to try for some whitefish. A venture which didn’t pan out.

While lounging around the next morning I thought to myself, Yellowknife is a place where you can start up until three in the morning swapping fish stories only to get up the next morning to make new ones. It is a beauty.

One my way back into town from the lake I stopped into the Scouts cabin on Pontoon Lake where an ice road was plowed into. The Scouts Cabin was a popular place for friends and I back eight years ago now. It is a little run down and is in need a major clean and renovation, but bits of history still hang on the walls.