For a week in August 2019, my partner, Marie, and I flew to Whitehorse, Yukon from Yellowknife for a weeklong road trip through southern Yukon and eastern Alaska. These are a collection of unedited notes and journal entries I took along the way.

You can also jump down to the photos here.

When we decided to go to Portland it just so happened that the food festival, Bite of Oregon, was happening at the same time.

I was very excited about this. I love food. Portland has good food. This was going to be good.

Right along the river, right across the street from our hotel, was the festival grounds. Fenced off on a grassy dirt area, 20-30 vendors were all set up selling bite-sized foods for goers to try.

Wanting all the food, we got tickets for the Chef’s table. Some of the top chef’s in Oregon has planned small dishes and of the 8 we could try five. It was fantastic. I have no idea anymore what I tried, but it was good.

The one problem with the festival though was during the day it was horribly hot. To the point of uncomfortable while trying to eat food. And to make matters worse there were few places to go that had shade. There were so many people.

I’m being picky, obviously, but it just wasn’t what I imagined. It felt, to me, like Folk on the Rocks, without the music. Granted the entry fee was only $6, so the barrier to entry was quite low, I for some reason thought it would be a bit more classy.

What I wish we had done more of was watching the demonstrations. They only had one stage and the demos were so spaced out over the three days, it would have been hard to seem more of them. And I wanted to see the rest of Portland. We did see a fun demonstration on Street Tacos. The demo, the banter, the teaching, was what I was looking for out of the festival, almost more so than the food.  Clearly I want to go to a food conference and not just a festival.

All in all, it was neat and I’m glad I experienced it. I did eat a lot of good food.

On a Sunday morning, we got up and trekked up 12 streets to the downtown Portland location of Blue Star Donuts.
I’d heard a lot of about donuts in Portland. “Go to Voodoo Donuts” people would stay, but honest I wasn’t that into it. Donuts packed with as much crap as possible didn’t appeal to me. Blue Star Donuts on the other hand. They seemed to have some class to them.

We arrived at Blue Star about 20 minutes before they opened, 8 am, to find only two people in line ahead of us. So we waited and as the time grew nearer the line grew longer. By opening the line must have been 30 people long, on a Sunday morning.
We decided to try six. I won’t review them all – go try them for yourself – but I will say that we can 6 to try, not to eat in one sitting. They were as follows:
They all tasted real if that is a way to describe a donut. They didn’t just taste like sugar, they tasted like real ingredients, which goes a long way.
The neatest part for me, though, was actually seeing them prep, bake, fill and display the donuts. It was quite the production, in a relatively small space.
If you go to Portland, try the Blue Star donuts. It is less of a line than Voodoo, but they do still sell out.

I love Farmers Markets. I’ve gone to them since I was a little kid. They bring me so much joy nowadays. Seeing all the fresh food and products that have been grown, harvested and made by local people. It puts a smile on my face that I can’t get rid of. No, seriously, it happened. 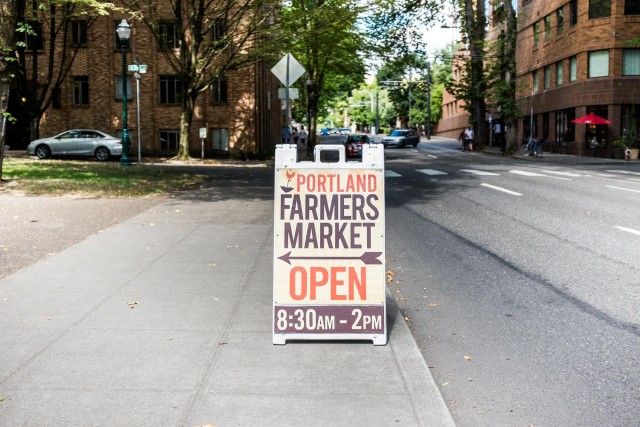 While visiting Portland, Oregon, we went to the Portland Famers Market. It is Portlands longest running Farmers Market and is located in a square at the Portland State Univesity in downtown Portland. There are other markets around town run by the same organization, but this one seemed to be the biggest.

There were so many different products that my head was spinning, but most of all it felt like a communal place. People were meeting up with friends and family. Rushing to their favourite vendors, all while having a good time. Not unlike the Yellowknife Farmers Market.

The primary vendors were the ones selling products a customer could take home. The produce, fruits, milled flour, cured meats, baked bread and pastries. The market also had a select few ready-made food vendors selling food of different cuisines. And at one end a band played. Although there seemed to be buskers throughout the market.

I would shop here all the time. I wouldn’t leave.

I don’t travel enough to have a system in place for what gear to bring. Instead, about an hour before my flight, I go into a panic about what camera and associated gear I should bring with me on said travels. 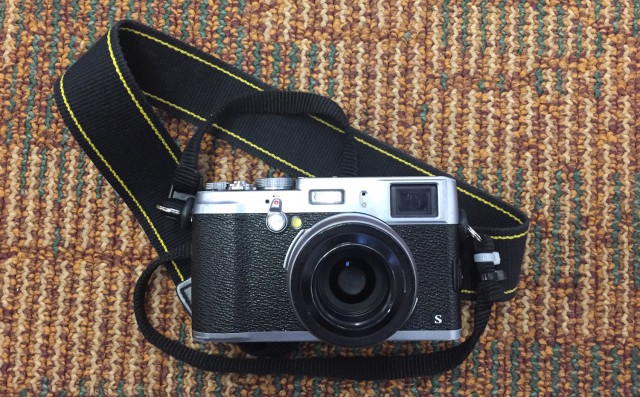 Last February I went to Las Vegas for the first time. I took a Fuji X100s mirror-less camera with me that has a prime 35mm lens. I also took my Nikon D600 with a 24-70mm Lens. Both cameras are great, however, I only used the Fuji. It was simply lighter and easy to carry around, whether walking the Vegas strip or hiking in the desert. I didn’t use the big DSLR at all.

Next trip, a conference in Toronto, Ontario and a visit with family. For this trip I opted for only the Fuji. I wasn’t primarily going for a holiday and didn’t suspect I would be doing much sightseeing. It works perfectly.

The dilemma with this trip I’m on, that will have me going from Victoria, BC to Portland, OR and then back again along the west coast, is that I don’t know what I will encounter.

Food Festival and street events in Portland, the Fuji would do fine. Driving up the coast and hiking in Washington’s parks, I’m not so sure of.

The deciding factor that finally made me decided to only bring the Fuji X100s was a simple question to myself: what will I be using the photos for.

The answer, nothing but blogging, Facebooking and Instagraming. I’m not a photographer who is going after photos to sell or to get into a big magazine. I’m a casual photographer who likes to document the experiences that I have and then share them through some of these mediums.

The Fuji works perfectly for this.

And at the end of the day the Fuji does shoot some amazing RAW images that could be used in print if I ever wanted to explore that route.

Expect more from me on the topic if Portland and travels through the area.